With the newest version of  TOTAL Desktop advisors are now able to open a retirement projection graph during data entry. This graph allows advisors to actively see how each change affects a scenario.

This graph can be opened in the top toolbar under the “Tools” drop-down or by pressing the F9 key on the keyboard. When a scenario is opened, a graphic model of the retirement capital for that scenario will be drawn.

For users who subscribe to both Easy Money and Golden Years, the tool remembers the last report used to determine whether the graph shows the results of the Easy Money or the Golden Years calculations.

This projection graph updates instantly to any changes made in the plan, allowing advisors to quickly see how their changes affect the retirement capital projection. No longer will advisors using the desktop version of TOTAL have to regenerate reports for every change they make to plans to visualize the impact.

Using the Allen Abbett scenario I’ve made a couple simple changes to one of the assets to demonstrate how modifications to the plan create changes to the graph. Below shows what the projection looks like when new changes were made to the “Allen’s 401k” asset. This is the graph when no changes have been made to the asset: 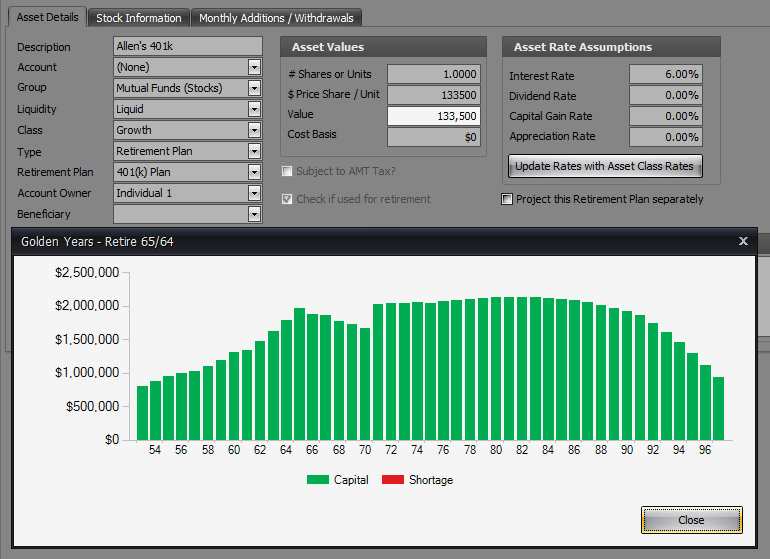 When the rate of return for Allen’s 401k is effectively halved, you can see how the projection turns to a shortage in the later years and fails:

And when the starting balance is doubled with the original rate of return, you can see the graph’s larger final surplus: Here at Money Tree we are excited to provide this tool to our TOTAL desktop users who have long requested a new feature that would help them see what certain changes will do without having to regenerate a new report.